It’s one of the best times of the year, Toronto Veg Food Fest is back! It’s the biggest Veg Fest in North America… it’s huge! Three full days of vegan food, speakers, demonstrations, and community. I love it! I spend the weekend hanging out with friends, meeting the incredible Meat Free Athlete community, and eating lots of delicious vegan food.

For the second year, I’ll be speaking on the Vegan Athlete panel “Plant-Powered Performance: Five Superstar Vegan Athletes” at 4:30 pm on Saturday September 8th, 2018. Come check it out at the South Common Tent, Special Presentation area.

PLUS, I’ve also been invited to speak on the Vegan Influencers panel, which will be held on Friday September 7th, at 5pm at the South Common Tent, Special Presentation area.

The panel will be moderated by Avra Epstein, creator of Vegan Social Events and lifestyle blog Love Wild Live Free. We’ll be discussing veganism in the world of social media, and effective advocacy strategies within the growing online vegan community.

The other great vegan panelists I’ll be speaking with include: Lisa Le of The Viet Vegan, John Lewis aka Bad Ass Vegan, Candice Hutchings of The Edgy Veg, Maddie Lymburner, and ZALE.

If you’re in the Toronto area September 7th – 9th, make sure to come out to Veg Food Fest! It’s a free event, and it’s such a great time!

Hope to see you at one (of both) of my talks, and make sure to say HEY if you see me, I absolutely love connecting with Meat Free Athlete Fam! 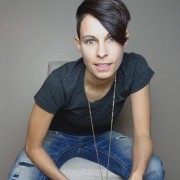 Anne-Marie is the Founder of MeatFreeAthlete.com (est. 2012), and is a vegan athlete and animal rights activist. A competitive athlete for over 20 years, she is a former gymnast and hockey player, and is currently a Black Belt in Tae Kwon Do. Anne-Marie went vegan, for the animals, in 2011, and her mission is to help people go (or stay) vegan by sharing her personal journey, and creating this free vegan lifestyle resource.

Meat Free Athlete was launched in 2012, and is the result of my passion for sports, fitness, nutrition, and living a compassionate vegan lifestyle. My goal is to share my vegan journey and help people go (or stay) vegan. My website is a free resource of all things vegan lifestyle, and it’s not just for athletes, it’s for everyone! Read More
Facebook Twitter Google+ StumbleUpon Tumblr Pinterest Reddit WhatsApp Telegram Viber
Close
Close